Idaho is a state on the West Coast of the United States, bordering Washington, Oregon, Utah, Nevada, Wyoming, and Montana. Its capital city, Boise, is very close to the state’s southwestern border. Being close to a number of popular cities such as Portland, Seattle, Salt Lake City, Reno, and Sacramento, what makes Boise special? These is more to Boise than being the capital city and most populous city in Idaho. It is consistently rated as one of the top places to live in the U.S. for its safe environment and nature influence relative to other urban areas. Its cultural life is another strong point of the city, offering the Gene Harris Jazz Festival, Boise Little Theater, Boise Contemporary Theater, Idaho Shakespeare Festival, and 208 Comedy Fest among other events and institutions. Keep reading to learn more about the instrumental music, dine-in concerts, and community promotion that makes Boise’s music great...

Event Tickets for Boise Concerts are on sale now!

Instrumental music is an often-overlooked part of the music industry. Most listeners prefer Top 40 chart toppers, mainly composed of mainstream pop tunes with steady beats, melody-focused compositions, and predictable lyrics. These songs are great for sing-alongs, clubs, or dances. However, there is also a need for more eloquent instrumentals in the music realm. Boise, Idaho has a developed and flourished instrumental community, represented by orchestras, ensembles, and choirs.

Take, for instance, the Boise Baroque Chamber Orchestra. Formed in 2003, its aim is to bring baroque and classical repertoire to the city. It consists of members from the Boise Philharmonic, the Boise Philharmonic Master Chorale, and the Opera Idaho. The style of music they play is related to 17th century European art and culture, characterized by ornamentation, complexity, juxtaposition, drama, and tension. For listeners who want to enjoy a fully-supported instrumental music scene, go to Boise, where composition is appreciated, celebrated, and performed regularly.

For Concerts in Boise, please see our event listing calendar of Concert tour dates below!

From bars to grills to taverns to cafes, Boise’s food industry thrives when music is in the picture. Food venues that host concerts regularly include: Riverside Grill, The Sandbar Patio Bar & Grill, Owyhee Tavern, Chandlers Steakhouse, Asiago’s Solid Grill & Bar, Lack Stock and Barrel, Trillium, Fork, Juniper, Twigs Bistro and Martini Bar, Le Coq d’Or, Rembrandts, Capitol Cellars, The Local, Bella Aquila, Cowboys Chophouse, and Rice Contemporary Asian Cuisine. For entertainment in Boise, Idaho, no one has to choose between food and fun. Folks who are not as inclined to dance will enjoy taking the pressure off and dining instead. Many of the musicians, singers, and bands who play restaurants also hold ticket-selling shows at more typical concert venues, so be sure to see the concert lineups of your favorite dine-out dinner accompaniment.

Boise cares about its local and regional talent...

Some cities really have pride in who their people are and what their people do. Boise, Idaho is one of those cities. Organizations such as Go Listen Boise and Idaho Statesman work to improve the success and vibrancy of the music scene. With tools for listeners and musicians to find local artists, find local venues, and find local resources, there is good work being done to develop Boise’s insider music industry.

How Do I Find Upcoming Boise, Idaho Concert Events Near Me?

See below for a list of Concerts scheduled in Boise ID. 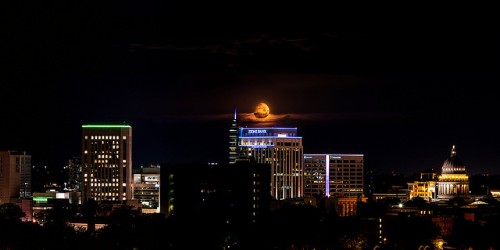