Cincinnati, Ohio, is one of the southernmost cities in the state, extremely close to the borders of Kentucky and Indiana. A Midwestern state on the cusp of the South, Cincinnati has a unique position culturally. Over the years, Cincinnati has had a number of nicknames, including “Losantiville” and “Porkopolis.” This industrial city has played a role in some major historic events and phenomenons, such as the Underground Railroad, aerospace developments (Neil Armstrong is from Cincinnati), and public television. Are you curious about what makes Cincinnati appealing musically? Read below to find out more...

Event Tickets for Cincinnati Concerts are on sale now!

Although Cincinnati does not take the cake for the most nationally and internationally successful musicians, there are a fair number of influential groups who have roots in the city. Some of Today’s favorites—Walk The Moon, Buffalo Killers, The National, Foxy Shazam—come from this city. 1950s artists such as R&B duo Calloway and ever-iconic Isley Brothers have called Cincinnati home, too. Clearly, Cincinnati is far from talentless, as its residents create some of the finest music around the United States.

For Concerts in Cincinnati, please see our event listing calendar of Concert tour dates below!

For Americana that screams of summer, the Young Heirlooms are a favorite. For bold alternative and indie, One Day Steady is a great band to give a go. For folk music filled with acoustics and harmonies, Buffalo Wabs & The Price Hill Hustle are pouring their hearts into their songs. For hip-hop inspired by the classics, Space Invadaz is a perfect pair. For classic country meshed with pieces of alternative and folk, Arlo McKinley & The Lonesome Sound emote their lyrics. For classic rock and roll that does not wax and wane with the times, Mad Anthony rocks. For alternative and indie music with smooth and melodious tracks, Let It Happen delivers. Other local favorites include Jeremy Pinnell and the 55’s, The Tillers, Multimagic, Lullaby Crash, Actual Villains, Homebound, Settle Your Scores, Mix Fox, The Cliftones, DAAP Girls, Automagik, BoyMeetsWorld, Northbound, and more. For listeners who adore local music scenes, Cincinnati is an unexpected powerhouse that begs to be heard.

Classical music has a thriving community in Cincinnati...

When local musicians are not performing in bands, some find their ways to Cincinnati’s operas, orchestras, ensembles and theatres where they also perform. The Cincinnati Opera has produced shows such as Die Fledermaus and Tosca. The Cincinnati Symphony Orchestra has worked with famous faces such as Yo-Yo Ma and Itzhak Perlman. The Cincinnati Ballet merges dance and music in the Aronoff Center for the Arts (Procter & Gamble Hall, Jarson Kaplan Theater, Fifth Third Theater), performing shows such as The Nutcracker by Frisch. The Cincinnati Shakespeare Company, The Ensemble Theater Cincinnati, and The Children’s Theatre of Cincinnati are other multi-art venues that often incorporate facets of acting, playing, dancing, costuming, and more.

In addition to Cincinnati’s own instrumental and vocal classically-trained talent, Cincinnati’s music scene excels in part due to its close ties with northern Kentucky music. A continual communication between these two regions’ music communities means that collaborations and partnerships are develop often. For listeners, this means that new faces in classical music are on display regularly, broadening the horizons and strengthening the ties of the local community.

How Do I Find Upcoming Cincinnati, Ohio Concert Events Near Me?

See below for a list of Concerts scheduled in Cincinnati OH. 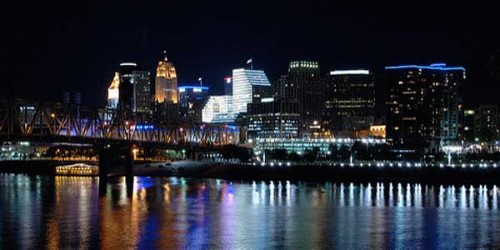