Los Angeles needs little introduction. The powerhouse of SoCal, the pulse of the nation’s film and television industries, the epicenter of celebrity culture, Los Angeles is no new name on the scene. Music lovers who have not considered the appeal of Los Angeles, read below to learn about what grants Los Angeles its notoriety in the world of music...

Event Tickets for Los Angeles Concerts are on sale now!

The music industry consists of firms and organizations involved with recording, producing, publishing, distributing, performing, and marketing music. California’s music industry has been a thing of wonder for over a hundred years, paralleling the rise of other forms of entertainment, such as silent films through the most modern movie technologies. With recording studios, performance venues, musicians, and more saturating Los Angeles, its prowess cannot be overstated.

Social scientist Richard Florida of City Lab found Los Angeles has the greatest number of music acts and the greatest number of musical acts per capita in the United States; with 175,083 acts, Los Angeles eclipsed the runner up New York by 59,316 acts. Additionally, this research found LA to beat out the competition of the Music Popularity Index (MPI). MPI uses the numbers of listeners, views, and plays for every act and band and organizes them by metro area in the United States. Astoundingly Los Angeles’ MPI is nearly twice that of the runner up.

For concert junkies, the intensity, vastness, and complexity of Los Angeles’ music industry is a good thing. It means that there is more of everything that is needed to go into making a concert and endless shows to see night after night. A music scene so large it is never fully explored, LA is for those who never want to be bored with the plethora of concerts in front of them. Interested in theatrical performances with a hop hop twist? Buy Hamilton Los Angeles tickets!

For Concerts in Los Angeles, please see our event listing calendar of Concert tour dates below!

A beacon in the world of music and arts more broadly, Los Angeles is a point of reference for many influential music cities. So well-known in the imagination of Americans and people worldwide, every other music city exists in relation to it. In the last year or so, The Strange published “Los Angeles Has Sun, but Seattle’s Music Scene Is Cooler,” Forbes published “Why ‘NY Versus LA?’ Is The Wrong (Music) Question,” and Vulture published “The Internet Doesn’t Matter, You’re Making Music in L.A.”

People who attend concert in Los Angeles can expect to experience a standard in music, arts, and entertainment that is repeatedly used to compare and contrast the next latest and greatest things around the world. For listeners who want to be a part of something incredible and iconic and understand what all of the fuss is about, Los Angeles is the place to be.

Los Angeles combines mainstream with independent in its music scene...

Listeners who want to see the mainstream, national headliners in Los Angeles will be thrilled by The Hollywood Bowl, Staples Center and The Forum, each hold over 17,000 people.

How Do I Find Upcoming Los Angeles, California Concert Events Near Me?

See below for a list of Concerts scheduled in Los Angeles CA. 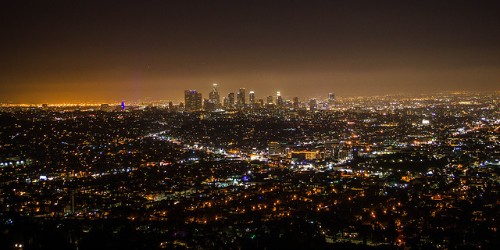