Memphis, Tennessee is a name in music like no other. On its own, Tennessee is a maverick and maven of music. Memphis is one of the state’s showstopping cities, a place with contributions that cannot be overstated. With a reputation for rock and roll, blues, country, soul, and blues, most listeners will find something to enjoy in Memphis. To explore the works of music masterminds, walk the steps of industry experts, tour the rooms of world-class musicians, and more, make your way to Memphis...

2020 Event Tickets for Memphis Concerts are on sale now!

Like other major cities in Tennessee, Memphis is packed with one-of-a-kind music attractions. Museums, landmarks, and theme parks can be found across Memphis. For American soul music, people should visit the record store and recording studio called Stax Museum of American Soul Music. Of course, Graceland is a must-see in Memphis, a perfect stop of fans of Elvis Presley, rock and roll, pop culture, and music history. Folks interested in the history of rock and roll should visit the original Sun Studio, a place in Memphis where the world’s first rock and roll single was recorded. For those who normally just like to watch concerts, Memphis is a place worth exploring before flocking to stages. Visitors and residents of Memphis should keep an eye out for national names at the city’s attractions; celebrities are often brought in to entertain guests on a whim.

For Concerts in Memphis, please see our event listing calendar of Concert tour dates in 2020!

For a down-to-earth Southern city, Memphis has some dynamo venues within its city lines. Take, for instance, one of the most iconic venues in the United States: B.B. King’s Blues Club, a Beale Street destination for music, food, and nightlife. With a ix of house bands and national acts, music lovers cannot go wrong here. Another distinct spot is Marlowe’s Ribs & Restaurant. On Elvis Presley Boulevard, this restaurant has an Elvis Presley theme, decorated with tons of memorabilia. A family owned restaurant with world-championship BBQ, this joint is more than a music spot. But, for those who come for the music, make reservations for Fridays from 10 p.m. to 12 a.m. For a tavern feel, go to Front Street to find The Blue Monkey (Downtown). A European-style tavern, visitors can count on fantastic food, handcrafted drinks, and foreign ambiance. Although music is not the focal point of The Blue Monkey, as karaoke nights and trivia nights scatter the event calendar, too.

Memphis is unparalleled when it comes to music history...

As written by the Smithsonian Institution, “In the quest to identify the roots of rock ‘n’ roll, all roads lead to Memphis.” To witness this history, explore Beale Street, which is covered in over 125 brass plaques of world-shaking musicians from modern Justin Timberlake to classics like W.C. Handy, Otis Redding, and Jerry Lee Lewis. Looking at such an incredible list of influential museums, there is little question that Memphis is the center of a music universe. Back in the 1860s, bands lined Beale Street, playing for folks passing by. By 1890, Orpheum (Memphis)—the Grand Opera House—was constructed. Later on, in the 1940s, this same street held jazz and blues legends within its dusky nightclubs. To parallel these developments, some of the first recording studios, museums, venues, and album shops formed in Memphis. For cultural breadth and depth in music, and for a place where music history is made, go to Memphis.

How Do I Find Upcoming Memphis, Tennessee Concert Events Near Me?

See below for a list of Concerts in Memphis TN scheduled for 2020. 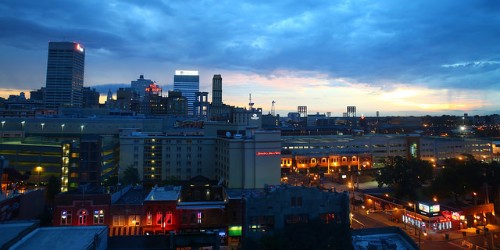