Salt Lake City is the geographically diverse capital city of Utah. Close to the Great Salk Lake’s massive waters, Wasatch Range’s snow-capped peaks, and more, this area of Utah is a nature haven. Beyond its geography, Salt Lake City is known for being founded by and containing the headquarters of the Mormon Church. Although Salt Lake City does not strike many people as a music city, there is plenty to listen to here. Keep reading to learn more about the music in this city...

Although Salt Lake City might not be the flashiest music city in the United States, it has a certain charm. Much of that charm comes from members of the music community who are devoted to passing along the torch of the arts. Take, for instance, local legend “Bad” Brad Wheeler, one of the many ambassadors of musicology in Utah. With a stunning mix of personal history and contemporary cultural connection, this former public radio DJ and blues musician is known for sharing his know-how in the arts with other locals. Dedicated members of the community such as “Bad” Brad Wheeler give Salt Lake City a distinct personality and authenticity that most other locales lack.

For folks interested in getting the insider knowledge, chat up pillars in the community like “Bad” Brad Wheeler. His top venue recommendations include Diabolical Records, The State Room, The Depot, The Urban Lounge, Kilby Court, and Bar X. Some of these spots are come-as-you-are dives, others are fast sell-outs that require tickets pretty far in advance. For travelers and locals who appreciate a grassroots approach to music, Salt Lake City is a wonderful place to explore.

Small cities to medium size cities rarely get the performers and numbers in shows as their larger urban counterparts. Even though Salt Lake City is slightly unconventional for an urban space due to its religious tones and environmental flare, the city competes with the best of them. Take, for example, the 30-year annual Twilight Concert Series. This showcase occurs at sundown in the Gallivan Plaza downtown, attracting over 10,000 people annually. World-class artists such as The Roots, Modest Mouse, Solange, and St. Vincent performed at 2018’s shindig, with tickets starting at only $10 per person. Past performers have included The Black Keys, Wu-Tang Clan, The Decemberists, Sonic Youth, Beck, and tons of other artists, running the gamut between trendy and revolutionary. Local acts proceed every national act, so expect a unique Salt Lake City flare to accompany these national and international showstoppers.

In Salt Lake City, plenty of emerging artists make way on a regular basis, and familiar artists continue to please crowds. Publications such as City Weekly track the artists in the capital of Utah, keeping an eye out for the best and brightest. Fortunately for locals, the talent of this city is so incredible that weekly updates are needed to track the most interesting developments in locally-based albums, concerts, bands, and more. This week, some featured favorite creators include Death Valley Girls, Gymshorts, Brain Bagz, The Travelin’ McCourys, Larry Keel, Kosha Dillz, Devmo, Stockton, Michael Franti, Thick Paint, Rubblebucket, and Claudia Simonetti’s Goblin.

How Do I Find Upcoming Salt Lake City, Utah Concert Events Near Me?

See below for a list of Concerts in Salt Lake City UT scheduled for 2020. 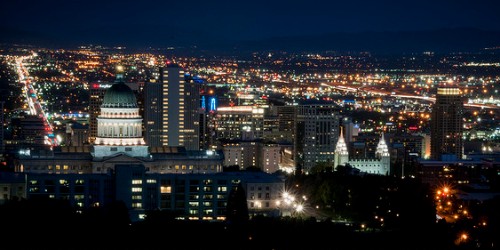