The Big Apple Circus is a travelling circus group that is based in New York City. Founded in 1977 by Paul Binder and Michael Christensen, it has experienced several evolutions over its multi-decade lifespan. Today, it is a nonprofit organization that specializes in outreach programs, in addition to their touring acts. If you are interested in learning more about the Big Apple Circus and seeing if it is a good activity for you and your family, stick around...

Circus acts are little capsules of entertainment that stretch the bounds of the possible. Requiring great skill, creativity, and stamina, performers specialize in particular acts to hone their skills and be performance ready. At the Big Apple Circus, these acts are inspired from international circus shows, focusing on object manipulation and stunt-oriented tasks. Some of the most popular and well-known displays include aerial straps, acro balance, flying trapeze, and animal presenter.

In the current lineup at Big Apple Circus, there are nine phenomenal acts. Stephanie Monseu works as a ringmaster. Spicy Circus—a group of performers—collaborate on the wall trampoline. Mark Gindick amuses the crowd as a comic character. Jenny Vidbel shows her skills as an animal presenter. The Flying Tunizianis—a group of flexible, strong costume-adorned performers—work the flying trapeze. Emily Faltyny masters the freestanding ladder. Duo Fusion—an ultra-strong man and woman—show off in acro balance. Desire of Flight—wildly flexible, dance-like people—take to aerial straps. Adam Kuchler engages the audience as a comedic character who also does tricks with sparkling cigar boxes. Although these acts do change from time to time, the selection is always a sure way to amaze audiences with what people can do with enough intention, practice, and talent.

One of the things that makes Big Apple Circus unique is that it has led the charge in terms of modernize and improving the ethics of circuses. When it became a nonprofit organization, it developed several outreach programs. They helped develop ClownCare, a program that brings friendly, specially-trained clowns to healthcare facilities to cheer up patients. Their positivity and humor is a splash of light to staff, patients, and families. The Big Apple Circus also led the charge with programs dedicated to the humane treatment of animals, something that was overlooked in circuses of the past. Other programs include Circus of the Senses, which are performances designed for people with vision and hearing impairments, as well as special needs, and Embracing Autism Performances, which focus on other sensory adaptations that make the circus accessible for more people.

If you are interested in experiencing the circus with your family, the Big Apple Circus is a top-of-the-line choice. Be amazed by the super-human performers who has honed classic and cutting-edge acts alike. Explore ticket information to see what shows are available near you.

Big Apple Circus Events Near You 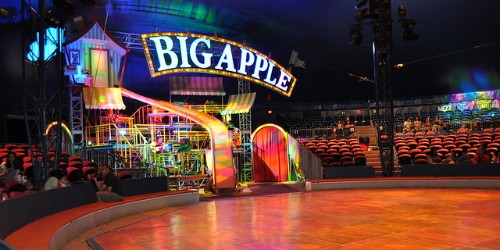