One of the most classic hits of The Beatles is ‘Love’. Love is one of the band’s masterpieces, which celebrates the musical will of The Beatles, it tours the content of the song in a sequence of scenes occupied by real and imaginary individuals...

The Cirque du Soleil Las Vegas show is built with loads of extreme performances such as the aerial revue accompanied with a youthful energy, urban-styled extreme sports and freestyle dances. What makes the show more enthusiastic are the presence of the wonderful acrobats, inviting dances and eye-catching visual effects supported by the classic rock and roll soundtrack of Love.

Also, the show seems to be the other way of narrating the Beatles’ history. Originally, Love began its journey through a collaboration between Cirque du Soleil’s Guy LaLiberte and George Harrison. When George Harrison died, the remaining Beatles and their families decided to carry Harrison’s vision to life by taking part of the idea about song assortments and the orders of the songs for the fulfillment of the show manifested by Harrison’s image to life.

The success of Love is backed up with the multi-talented musical director Sir George Martin. He is best known by his work of creating timeless and classical hits of The Beatles. Martin has proven so much in his craft as a musician/musical director, in fact, Martin’s son named Giles is also part of the show.

Throughout the show, most hits from the Beatles are featured such as the “I Want To Hold Your Hand”, “Drive My Car”, “Get Back”, “Help”, “Lucy in the Sky” and “Octopus’ Garden”. These songs play as background music for several performances, including the aerial ballets and aligned skates taking the stage with a leap of 11 foot ramps.

The show The Beatles: Love in Las Vegas is executed in a theater carrying a maximum of 2000 seats. The powered sound system comprises a total of 6,341 speakers, which makes its audiences feel more enclosed with the music. The enthusiasts of The Beatles will surely embrace everything about this show.

Cirque du Soleil - The Beatles: Love Events Near You 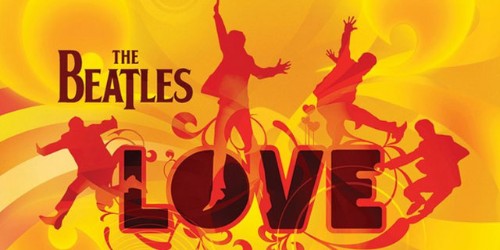