With a career that crosses decades, George Strait’s music reaches a variety of people, people of different ages, people from different states, people with different life experiences. Some of his most well-known tracks include “The Chair” (1985), “Amarillo by Morning” (1982), “I Cross My Heart” (1992), “Check Yes or No” (1996), “All My Ex’s Live in Texas” (1987), “Give It Away” (2006), “I Saw God Today” (2008), and “Write This Down” (1999). He has dozens of albums to his name and has released a new one nearly every year since his first album—Strait Country—in 1981. Some of his newest ones include Honky Tonk Time Machine (2019) and Cold Beer Conversation (2015). Even with a bountiful body of music, George Strait has had few duds, putting out ultra-popular and high-quality music since the start.

Strait’s life has taken some interesting turns. For most of his young life, he did not listen to country music. In fact, Country Music Hall of Fame and Museum in Nashville writes that he was a fan of mid-1960s British invasion rock—he even joined several garage bands back in the day. He eventually discovered country in Hawaii of all places, rather than in his hometown of Pearsall Texas. Even since becoming a singer, Strait has experimented with acting and other entertainment gigs. And, although Strait is as old country as it gets, he has some more technologically-informed work, such as his work on albums like The Road Less Traveled (2001), Honkytonkville (2003), and Somewhere Down in Texas (2005).

In 2012, Strait announced that he was retiring from touring. However, in 2016, he left the studio and took up live performances again. This more manageable, somewhat smaller tour has been ongoing since then. Strait tells The Boot that he doesn’t want to retire when no one shows up at shows anymore; he wants to go out on a high note. Fortunately, as it stands, fan support and enthusiasm is roaring, and Strait’s team is responding to the fans with more concerts to come. To have the chance to hear George Strait and his great influence on country, consider picking up tickets today.

George Strait Events Near You 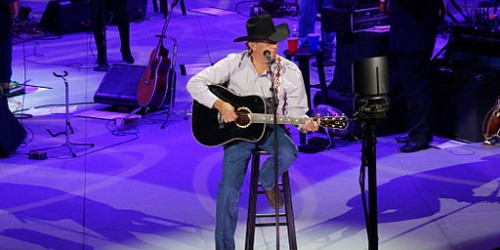