From the Rolling Stone to Ranker, Iron Maiden is consistently noted as one of the best heavy metal bands of all time. Yet, when the group got together in 1975 in East London, few could have predicted the enduring and unusual path the band would take. The group first consisted of Steve Harris, Paul Day, Dave Sullivn, Terry Rance and Ron Matthews. However, more than most bands, Iron Maiden has had many reincarnations, cycling through members numerous times. By the time their first studio album was released in the 80s, there had been around six changes in lineup. Over forty years later, Iron Maiden has withstood instabilities--and perhaps used them to their advantage--as they continue to tour...

One of Iron Maiden’s most defining characteristics is that they make heavy metal that does not sound like most other metal. Instead of playing only metal, they have an equally robust body of progressive rock. Fans of Judas Priest and Pink Floyd alike will find something in Iron Maiden’s discography to appreciate. Whereas most quintessential heavy metal relies on weighty, intense, driving, dark features, Iron Maiden has almost always written metal around more traditionally pleasing musical components—melody as opposed to beat or guitar solo. Plus, with a slightly larger band size and relatively quick turnover, each musician stands at the top of their craft and approaches performance from a novel background, from swing drumming to classic rocking to funk channeling.

Iron Maiden has released sixteen albums, but their work also includes compilations, EPs, singles, music videos, and live albums. Crowd-favorite albums include The Number of the Beast (1982), their departure from punk into a more menacing and moody sound; some of the band’s most anthemic songs are on this one. Powerslave (1984) is another top selection. Casual listeners are drawn to the strong, striking opening track list, but folks who know the group’s discography attest to the hidden gems tucked away on this one— “Losfer Words (Big ‘Orra)” and “Back in the Village.” Some of their most well-known songs include “Wasted Years” (1986), “The Wicker Man” (2000), “The Trooper” (1983), “2 Minutes to Midnight” (1984), “Aces High” (1984), “Running Free” (1980), and “Fight of Icarus” (1983).

For people who appreciate metal that is filled with ingenuity but still appeals to classics in the genre, Iron Maiden is a top contender. Although they have not promoted new music in a few years, they still tour. In 2017, they embarked on their Legacy of the Beast World Tour—an ongoing concert series that has been extended multiple times. Most tour stops are in the United States, but there are international concerts in queue, too. Purchase tickets to see Iron Maiden perform at a venue near you.

Iron Maiden Events Near You 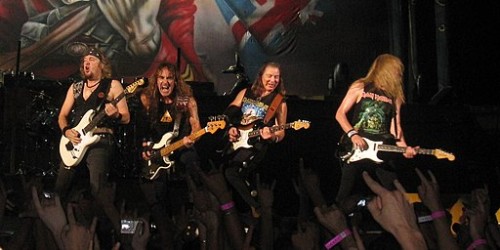