Don’t Let Dreams just be Dreams: Le Reve is a water-based show at Wynn Las Vegas. The name “Le Reve” comes from the French words, which means “The Dream”. The idea of naming the show as ‘Le Reve’ was taken from a 1932 oil painting by Pablo Picasso, the oil painting was inspired by Picasso’s 22-year old mistress named Marie-Theresse Walter...

In the year 2001, the painting was purchased by Steve Wynn with an approximate value of 60 million dollars. Among the other art collections of Steve Wynn, Le Reve was the focal piece and he even named his Wynn Las Vegas resort after it.

‘Le Reve’ is a must-watch show where dreams unveil to reality. The show’s opening starts with a play embellished by a woman wearing a beautiful red dress falling to sleep and bringing the audience along with her journey to dreamland. Everything in the show is fully engaged of how dreams really take place in reality.

The stage is entirely occupied with gallons of tank waters approximately amounting to 1.1 million gallons, under the water are the platforms going up and down for several scenes in the show. The show is ideally created by the legendary director Franco Dragone (former producer of Cirque du Soleil), Dragone has been known by his trademark turns of athleticism and style.

The show is undeniably spectacular that comes into sight being one of the most amazingly beautiful and breathtaking shows ever created in Las Vegas.

Le Reve has the kind of setting that makes people escape reality and just enjoy the moment to make dreams real while it lasts. It also brings different emotions and moods to the audience because of its relaxing and dreamlike atmosphere. It is a 90-minute show performed with 75 theater members.

The successful show is something that Dragone has always dreamed of before, now his dream has become his reality. A good example that dreams are only dreams when we dream of it, wake up and dream again as you come to visit the Le Reve show.

Le Reve Events Near You 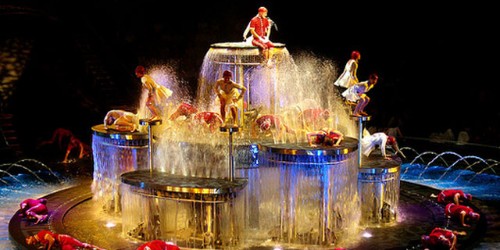