Marco Antonio Muniz, commonly known by his stage name Marc Anthony, is a multi-talented musician, actor, singer, and producer known as the best-selling salsa artist of all time. With more than 12 million albums sold, 26 Billboard chart hits, and over 350 million views on YouTube, the Grammy-Award winning artist is known for his talent, technique, and personality. An inspiration and a heart throb, there is a lot to learn about Marc Anthony...

Throughout his whole career, Marc Anthony has blended the cultural influences in his life to make art. Born and raised in New York, he absorbed the cultural melting pot of the big city. However, coming from a Puerto Rican family who loved traditional food, music, and culture, he learned about the Latin world. In fact, he was named after the Mexican ballad singer, Marco Muniz. Marc Anthony embraced this destiny early on, singing and recording English-language dance music in freestyle. It was not until the ‘90s that he found his niche: salsa. Recording three salsa albums in a row—Another Note, All in Time, and Against the Stream—he rocketed to the top of the genre, making his way into world-class venues.

After establishing himself in salsa, Marc Anthony began to branch out publicly with other musical interests. His pop hit “Tell me” (I Need to Know) took over air waves in 2000, part of his first English album. It was well received, to say the least, going triple-platinum and Best Latin Pop Album and Best Salsa Album in the Grammys. From there Marc Anthony has explored original music in the tropical genre, such as “Live My Life.”

Although Marc Anthony has had several successful acting projects since the ‘90s—particularly in Spanish-speaking films—he is most known for his on-stage musical achievements. According to Marc Anthony himself, he “is in constant touring demand.” From ballads to dance jams, he does it all on stage, enticing audiences with his performance flare. Into his 50s, he still has “it”. Of course, Marc Anthony devotes special attention to Central America and South America. Seeing him on tour there is a great opportunity to plan a vacation to a new corner of the world. For those who would like to see his performance a little closer to home, check out one of his tours near you. To find out about ticket information, including performance locations and prices, search the site.

Marc Anthony Events Near You 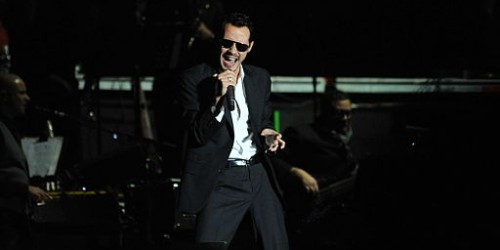