Million Dollar Quartet is the unplanned recording of jam sessions of the legendary artists Elvis Presley, Jerry Lee Lewis, Johny Cash and Carl Perkins. It was formed back on December 4, 1956 at the Sun Record Studious situated in Memphis, Tennessee...

The Million Dollar Quartet musical show was originally written by Floyd Mutrux and Colin Escott, which portrays the Million Dollar Quartet jam sessions. The musical show was first premiered at the Florida’s Seaside Music Theater and then moved to the Village Theater situated in Issaquah, Washington. Prior to their Las Vegas show, they had performed in various theaters across the globe, including the Chicago’ Goodman Theater (2008), Chicago’s Apollo Theater (2008), Nederlander Theatre (2010), New World Stages (2011) and Noel Coward Theater (2011).

Now, the musical show will be caught performing in the Main Showroom at the Harrah’s Las Vegas. The musical show indulges the beauty of the past with the legendary 1956 rock and roll jam sessions that would bring a mixed touch of emotions to the audience. It is truly heartwarming and relaxing to hear such wonders of the timeless hits performed by the very talented, versatile and naturally charismatic singers of today.

Million Dollar Quartet Events Near You 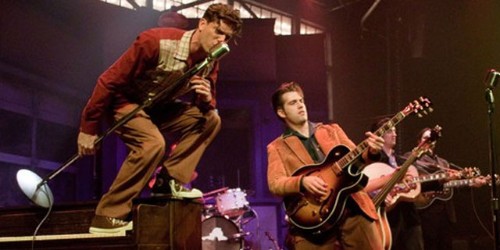