A product of the English-folk revival, Mumford & Sons blend rock, bluegrass, folk, and country to create their popular sound. Since 2007, the band has been active, recording popular songs such as “The Cave” (2009), “I Will Wait” (2012), and “Hopeless Wanderer.” If you are looking to learn more about this band and how to see them in concert, keep on reading...

Mumford & Sons is still maintaining a connection with their original lineup. Named after Marcus Mumford—the band’s banjoist, guitarist, and drummer—the member list is not expected to shift anytime soon. In fact, according to the group, their name is supposed to bring to mind something, old, worn, antiquated, and familial. This is a new take on the meaning of a boy band. The rest of the quartet is comprised of Winston Marshall (vocals, banjo, and dobro), Ben Lovett (vocals and keyboard), Ted Dwane (vocals and bass). Coming from a ‘00s music scene with lots of shiny, new artists, ranging from Arcade Fire to Florence + The Machine, the group has managed to stand out.

Although Mumford & Sons’ earlier work gained considerable attention with fans, it wasn’t until 2011 when awards started rolling in for the group. Their accolades include Grammy Awards, Billboard Music Awards, Brit Awards, Juno Awards, Echo Awards, and more. Their music has been compared to a number of other artists in the folk rock and indie world, such as Imagine Dragons, The Lumineers, Kings of Leon, Of Monsters and Men, The Avett Brothers, and more. With each new album and EP release, the band has become more varied with their style and sound, showing that their journey is just starting.

Following their international tour in 2012 for Road to Red Rocks, Mumford & Sons decided to take an indefinite break. Yet to fans’ delight, they returned around three years later in 2015, bringing their third- studio album with them, followed closely by a new EP. Since then, Mumford & Sons has been continuing to tour the world, record new music, and film music videos. In fact, their latest tour—the 2019 tour for the album Delta—reached the United States, Mexico, and beyond, performing alongside acts including Portugal. The Man, Tennis, the Milk, and Lord Huron. The group has spread their reach far beyond their beginnings in Great Britain, which makes snagging tickets for tour more realistic for millions of fans globally. To learn more about ticket options and availability, start your search today.

Mumford And Sons Events Near You 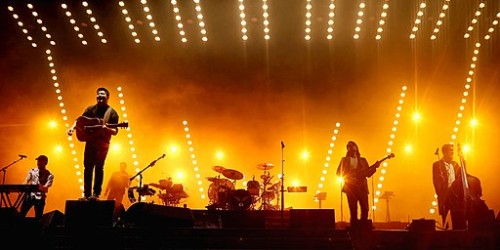