Rock of Ages Tickets On Sale at CheapoTicketing


Rock of Ages was formed at the time of the classic rock hits in the 1980s with its main genre ‘glam metal’. The band is one of the most famous glam metal bands in the history, which has been known in performing a rock/jukebox musical over the years. The famous rock musical show features hit songs from Bon Jovi, Styx, Pat Benatar, Steve Perry, Europe, Poison, Journey and more from other well-known rock band of the history...

During the show, the band would consecutively separate the ‘fourth wall’ addressing the audience to at least forget in a while that they are actors in a musical show. It’s an arena loaded with great singers, artists, music and ambiance. Adding to their unstoppable success in the rock music industry includes the five ‘Tony Awards’ and being granted as the Best Musical Rock Show in the history.

After making its first Broadway appearance back in the year 2009, the band has generated a duplicate productions worldwide including the United Kingdom, Japan and Australia. The rock musical show has just been awarded as the 29th longest-running show on Broadway music last October of 2014.

Now, Rock of Ages brings more surprises packed in one extreme performance at the Venetian, Las Vegas. The show takes people back to a 1987 experience with touches from the 80’s rock anthems including the ‘We Built This City’, ‘We’re Not Gonna Take It’, ‘Wanted Dead or Alive’, ‘Hit Me With Your Best Shot’, ‘I Wanna Know What Love Is’, ‘I Wanna Rock’, ‘Every Rose Has Its Thorns’, ‘Any Way You Want It’, ‘Don’t Stop Believin’ and more of the 80’s most timeless classic rock hits.

Rock of Ages Events Near You 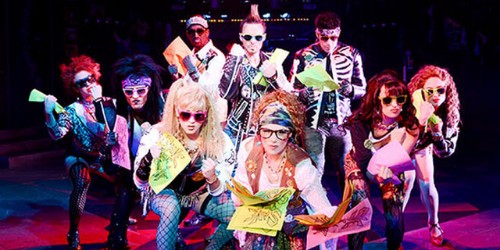