Santana Tickets On Sale at CheapoTicketing


Founded in the late 1960s by Carlos Santana, ‘Santana’ is a Latin Rock band based in San Francisco. They first came into popularity after they had performed a Latin rock song named ‘Soul Sacrifice’ back in the year 1969, which also led the band to its very first album ‘Santana’. Two years after their successful Santana album, another hits have followed, including the ‘Santana III’ and ‘Abraxas’...

However, minor changes in their Latin rock music came in the following years due to Carlo Santana’s involvement with guru Sri Chinmoy, who took the Santana band to another music genre, though still keeping a little influence of its original version of Latin.

Santana was given tribute in the year 1998 being granted the ‘Rock and Roll Hall of Fame’ with the band members Carlos Santana, Gregg Rolie, Michael Shrieve, Mike Carabello, David Brown and Jose Chepito Areas.

Lining with the most admired bands in the rock music industry, Santana is one of the most heard and famous rock bands associated with real proofs of success. In fact, the band has achieved a total of eight Grammy Awards and Three Latin Awards in the late 2000s. Also, Carlo Santana won one Grammy Award as a solo artist during the years 1989 and 2003.

Back in the year 2013, Santana Band revealed a classic reunion of their timeless classic hits to be released this year. Although the band has gone into various changes, Carlos Santana has remained firm and more motivate in bringing Santana to unstoppable success over the decades.

The band will be caught performing at the House of Blues, Las Vegas. An intimate and relaxing night fully packed with the Santana’s timeless classic hits that would describe the band’s run of success over the decades.

Santana Events Near You 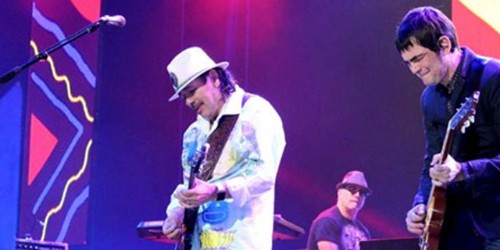