Slayer has reputed itself as one of the most influential, hardcore, and recognizable metal bands of all time. First formed in 1982 in the greater Los Angeles area, original members Kerry King, Jeff Hanneman, Tom Araya, and Dave Lombardo came together as a cover band, performing renditions of Judas Priest and Iron Maiden songs. However, they discovered that they could gain attention and build an audience by creating edgy, intimidating, agonizing music. Venturing into their own unique sound, Slayer devoured the much-desired attention, while at the same time setting the groundwork for the controversy the group is known for to this day. ..

Named one of the “Big 4” in metal—among contemporaries Metallica, Megadeath, and Anthrax—Slayer’s music is recognized as legendary in metal. Their most popular songs include “Angel of Death” (1986), “Raining Blood” (1986), “War Ensemble” (1990), “Dead Skin Mask” (1990), “Mandatory Suicide” (1988), and “Disciple” (2011). With over a dozen album releases—the most recent being Repentless (2015)—Slayer has created a prolific body of work. Their top-rated albums include Hell Awaits (1985), Reign in Blood (1986), South of Heaven (1988), Seasons in the Abyss (1990), Soundtrack to the Apocalypse (2003), and Christ Illusion (2006). If the song titles and album names are not enough of a cue into Slayer’s sound, their music is tenebrose and distinct. The overall feel is aggressive, twisted, and grimy, bound to grip listeners. The band accomplishes this with untamed, disheveled guitar solos; rapid, aggressive drums; and graphic, dark lyrical imagery keep fans hooked long after the first listen.

Because of their unusual body of work and risk-taking style, Slayer has scorched a spot in music history, impacting contemporary artists in metal. Among those shaped by Slayer are System of a Down, Biohazard, Malevolent Creation, Sepultura, Death Valley High, and The Black Dahlia Murder. However, for listeners who want to hear the original maniacs in metal, Slayer still performs. In its current state, the band consists of four members. Original member Tom Araya is still on vocals and bass, and original member Kerry King is still on guitars. Gary Holt--who joined in 2011--is on guitars, and Paul Bostaph--who joined in 1992--is on drums. Since May 2018, Slayer has been on their Final World Tour, an ongoing series of international concerts. They expect to wrap up the tour in 2020. So, for any Slayer fans out there, the band is running out the clock. Take the opportunity to snag spots before they perform their final show.

Slayer Events Near You 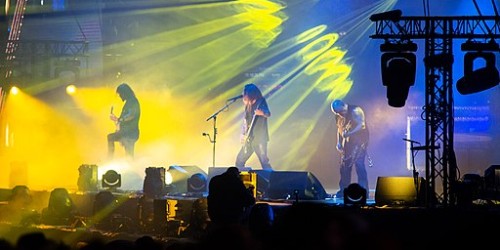