Terry Wayne Fator (popularly known as ‘Terry Fator’) is a multi-talented man living in Dallas, Texas. He is a singer, an impressionist, a comedian and ventriloquist. His career began after winning the America’s Got Talent (AGT) Season 2 and was awarded with a million dollar prize. After a year counted from his victory in the America’s Got Talent, he was regarded as the main attraction at the Mirage Hotel and Casino in Las Vegas, Nevada...

Dated back in the years 1987 to 1988, Fator had his first tour being the lead vocalist of the band ‘Freedom Jam’ produced by Young American Showcase. The Freedom Jam has performed in over 200 middle and high schools across Canada and United States.

Terry Fator began his ventriloquism at a very early age. He had bought his first Willie Talk Dummy when he was still in 5th grade and won a talent show at his exclusive church playing ventriloquism.

Fator has always been recognized as one of the most multi-talented actors in the history of entertainment, evidences are his recognition coming from the Hollywood’s big names such as Oprah and Simon Cowell.

Being the show’s headliner in the Las Vegas Strip, Terry Fator performs at the Mirage Hotel and Casino in Las Vegas, Nevada with his show entitled ‘The Voice of Entertainment’.

The show is packed with a full blast of entertainment, which includes comedy, singing and amazing celebrity impressions of musical superstars such as Dean Martin, Lady Gaga, Garth Brooks, Aretha Franklin and more.

The after-show reactions of Terry Fator’s fans are proofs of how amazing and talented he really is. His fans would always say that Terry’s talent shows extreme amusement and was more than what they had expected to see.

He never goes out of trend when it comes to drawing joy in the thousands of faces watching and admiring his show.

Terry Fator Events Near You 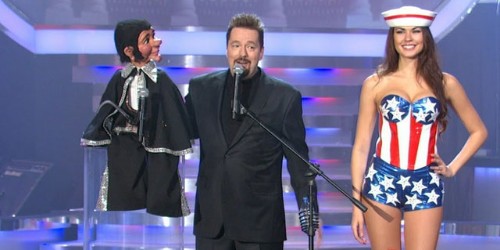