The Play That Goes Wrong Tickets On Sale at CheapoTicketing

The Play That Goes Wrong: Tour, Schedule, Tickets and more...


In live performance, sometimes things just go wrong. In The Play That Goes Wrong, artists have capitalized on a variety of common mess-ups, crafting an intentionally flawed production that has quickly become comic gold. Its creators call it “so wrong it’s right.” If you want to learn more about what this play is about, who is behind it, and how to see it, keep reading...

The plot synopsis of The Play That Goes Wrong is rather simple. A made-up acting group, the Cornley Polytechnic Drama Society, try to stage a production of a murder mystery set in the 1920s. However, in trying to put on the production, everything that can go wrong does go wrong. In this British comedy that debuted in London, intentionally bad, klutzy actors create chaos. The cast includes actors who portray a producer, a camera crew, a box office manager, a costume designer, a light man, a sound man, and other characters who are usually unseen in performances. In this orchestration of backstage mayhem, the goal is to get the audience to laugh, giggle, and cackle at the various shenanigans—props that will not cooperate, “dead” bodies that will not be still, actors that do not get along.

The quirky playwrights behind The Play That Goes Wrong are Henry Shields, Henry Lewis, and Jonathan Sayer. Rob Falconer composed the music. It was first written and performed in 2012. It is rumored that Shields, Lewis, and Sayer wrote the entire play in four weeks, and the cast spent only four weeks rehearsing. The original script was a one act, designed to be about an hour long. This first performed draft had an audience of five or so people, but word spread, and the group began filling small pubs, packed to capacity, before moving to bigger stages. With the popularity, the trio were urged to write a second act, which they quickly did. In 2017, five years after its opening, The Play That Goes Wrong won its first Tony Award.

Ideal for audiences of all ages and everyone who loves a laugh, The Play That Goes Wrong is an excellent choice for those who tend to dislike theater as well as those who have seen it all—both good and bad—unfold on stage in the past. However, some people may be a little exasperated at the failures that unfold. If Monty Python is up your ally, this is a must-see production. Currently, potential viewers do not need to travel to the Duchess Theatre in London, or the United Kingdom more broadly, to get a dose of top-notch British humor. It is on tour, inviting people to see everything “going wrong in a city near you”. California, South Dakota, Virginia, Connecticut, Arizona, Florida, Texas, Nevada, Idaho, Tennessee, New York, Washington, New Mexico, Alabama, Indiana, Delaware, Wisconsin, Montana, South Carolina, and New Jersey are just some of the spots on tour. For more information on the schedule and ticket availability, search here.

The Play That Goes Wrong Events Near You

The Play That Goes Wrong Schedule 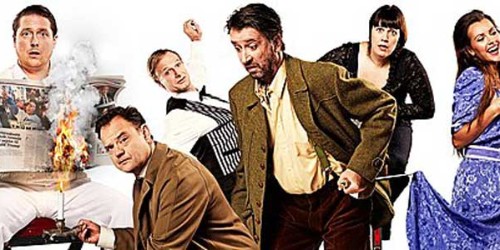