Why Don't We: Tour, Schedule, Tickets and more...


Why Don’t We is an up-and-coming boy band that came together in Los Angeles, California in 2016. Their music is primarily pop with some hip hop and rock mixed into it. To learn more about Why Don’t We members Zack Herron, Jack Avery, Danial Seavey, Corbyn Besson, and Jonah Marais, keep on reading...

Something that sets Why Don’t We apart from many young, aspiring bands is that prior to forming the group, each member had a solo career, and all of the members started as social media stars. Daniel Seavey gained popularity years ago when he competed on season 14 of American Idol, making the top nine at the age of 15. Three other members of the group—Jonah, Corbyn, and Zach—had released singles prior to the band’s formation. Fifth member Jack Avery took a slightly different path in the realm of entertainment, getting his start by performing in tours and participating in a short film. Together, the members represent a variety of locals across the United States: Oregon, Texas, Washington, Minnesota, Pennsylvania, and—of course—California.

In the span of just a couple years, the group has recorded a variety of EPs, music videos, and singles. Some of their EPs focus on major holidays, such as Christmas and Easter, which are seasonal favorites for fans. Although their music has not been riveting or course-changing in the pop genre, they have developed a sizable fan base through social media. Their award nominations include iHeartRadio Music: Best Fan Army (2019), Teen Choise Award: Choice Single (2019, 2018), iHeartRadio Music Award: Best Boy Band (2018), Radio Disney Music: Best New Artist (2018), in addition to nominations for a variety of Teen Choice and Kids’ Choice Awards.

People who enjoy the music of Shawn Mendes, Justin Bieber, Ariana Grande, The Chainsmokers, Charlie Puth, PRETTY MICH, and 5 Seconds of Summer would probably be impressed by Why Don’t We. Why Don’t We’s music can be found on their growing YouTube channel, Spotify, and Apple Music. Some of their most popular songs include “Unbelievable” released in 2019, “8 Letters” released in 2018, and Trust Fund Baby” released in 2018.

As Why Don’t We continue to find their voice and develop their group, tours are a big focus for them. There are few ways to connect as deeply and emotionally with fans than performing for them on stage. Their tour stops have included Boca Raton, Jacksonville, Raleigh, Baltimore, Albany, Gilford, Uncasville, Philadelphia, Moon, Springfield, Lincoln, San Antonio, Tulsa, Park City, Pelham, Saint Paul, and more. Why Don’t We definitely cast their net wide when it comes to concert locations, attempting to reach younger fans who aren’t able to travel to major cities to see their favorite groups on stage. For ticket information, click here.

Why Don't We Events Near You

Why Don't We Event Schedule & Tickets 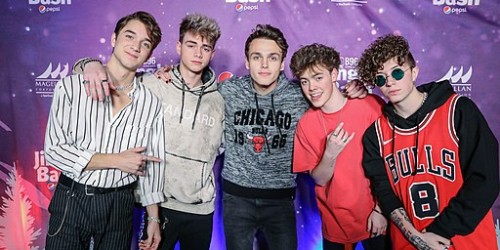