WrestleMania Tickets On Sale at CheapoTicketing


Hosted by World Wrestling Entertainment (WWE), WrestleMania is a day-long affair packed with wrestling events. Each year, a selected stadium hosts over a dozen matches and preshow bouts. What the Super Bowl is to football, or what the World Cup is to hockey, WrestleMania is to wrestling. It is the sport’s biggest event of the year by far. The Know describes it “Like A season finale for a television series, it’s a finish to story lines that have amassed over the previous year. Whatever conflicts the characters are involved in will be settled in the ring.” The tension, enthusiasm, and passion vested in this event is a testament to fans’ devotion to the sport and investment in the players...

Over the 35+ WrestleMania events that have occurred, matches have ranged from unusual to grueling. The hardcore match between Mick Foley and Edge featured a grueling, fiery—literally—battle. The undisputed WWE championship match between Chris Jericho and Triple H made history as creators of the “main event” phenomenon, or the match that goes on last, the finale of the finale. The Edge versus The Undertaker showed an incredible recovery against under-handed tactics in the ring. Matches at WrestleMania become ingrained in wrestling history, still points by which to judge future fights and develop the sport.

Although WWE Network is known among wrestling fans for their original documentaries and live pay-per-view matches, WrestleMania is the most popular stream they offer. According to Forbes, it brings in nearly 2 million subscribers who watch 23 million hours of content combined during the event. WWE is always honing their inline content in order to improve viewer experiences and bring devoted followers as close to the action as possible. However, online viewers are only one part of WrestleMania’s fanbase.

These numbers do not include the tens of thousands of fans who manage to secure tickets to the event—some of the most highly coveted seats in all of combat sports. States that have hosted multiple WrestleManias include California, New Jersey, New York, Michigan, Illinois, Texas, Florida, and Louisiana. In 2016, Arlington, Texas hosted one of the highest attended WrestleManias at AT&T Stadium, with over 100,000 fans in attendance. Although many seats are available, the good seats go quickly. If next year’s WrestleMania is on your radar, be ahead of the game and purchase your tickets as soon as possible. You do not want to miss the action.

WrestleMania Events Near You 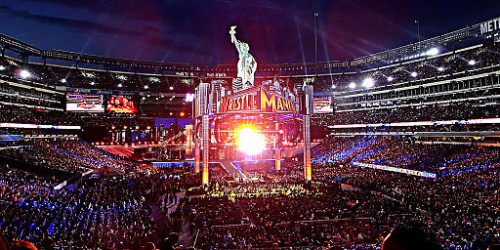