The Alvin Ailey American Dance Foundation (AAADF) is an organization created to further the message of Alvin Ailey (1931-1989), a renown choreographer, dancer, and cultural leader. The foundation prides itself on constructing a cultural community that is sustained by dance performances, training, education, and community programs. African-American heritage and cultural unity of all races, ages, and backgrounds is the foundation’s key social goals. The Alvin Ailey American Dance Theater is the most prestigious and well-known branch of AAADF, a must-see modern performance group...

Although there are many dance theaters and dance companies in the world, the Alvin Ailey American Dance Theater is something exceptional. Their start is humble. Alvin Ailey organized a performance group of African-American dancers on the streets of New York City in 1958. Their modern style and infectious spirit grew to shape American dance history. Within two years, the Company held residence at the Clark Center for the Performing Arts, where Alvin Ailey choreographed one of his most revolutionary masterpieces, Revelations. With international acclaim, two years later, the Company took its first intensive international tour, championed in President Kennedy’s International Program for Cultural Presentations. From the start, the Company embraced this foundation of collaboration, diversity, and outreach that has only continued to grow and flourish.

In total, the Alvin Ailey American Dance Theater has performed for around 25 million people in live audiences, covering 71 countries and every continent. A 2008 Congressional resolution even honored it as an American cultural ambassador with worldwide reach. 90 choreographers—and counting—have contributed to honoring Ailey’s work through the Dance Theater, creating over 235 works. They have been graced with an astounding number of honorifics, including awards, titles, and critical acclaims, from some of the most distinguished, illustrious organizations of all time.

Embedded in the work the Alvin Ailey American Dance Theater does is a sense of legacy and modernity. People from all walks of life can enjoy the work they do. Those interested in history and culture will marvel at the impact that dance can have on changing the way people interact with the world and view one another. Those interested in performing arts will appreciate the technical skill and practiced performances executed by the Company. And all audiences—even those who know nothing about dance—will be able to enjoy the storytelling and emotive qualities of the Alvin Ailey American Dance Theater. Inspiring and unifying, the tickets are well worth the cost. For those who cannot make it to New York City to see the Company, look out for seats at their traveling shows. In the meantime, to see a sample of the Alvin Ailey American Dance Theater’s work, check out the YouTube page, where behind-the-scenes snippets and insights from choreographers are shared.

Alvin Ailey Events Near You 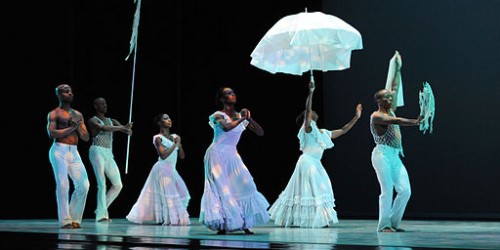