The “Blue Man Group” was established in the year 1987 under the ownership of Chris Wink, Phil Santon and Matt Goldman. It is an organization that produces concerts and theatrical shows, performing experimental music, multimedia and comedy, recorded music and scores for films and television, various appearances on television, and children’s museum exhibit called “Making Waves”...

The owners of the show Goldman and Wink are good friends since their junior high times in Manhattan. The two went to separate Universities in college, Goldman went to Clark University in Worcester, Massachusetts and Wink to Wesleyan University in Middletown, Connecticut. In 1984, Wink and Goldman reunited in New York City after college. Two years later, they met Stanton, who came from Savannah, Georgia.

Goldman, Wink and Stanton formed an organization named “Blue Man Group” in the year 1987 and began to play in venues around Manhattan, including the Dixon Place, PS 122, Performing Garage and Central Park.

One artist and director from the Club La MaMa named Meryl Vladimir saw the group’s potential as she witnessed their work during a variety show hosted by Alien Comic (Tom Murrin). After that, she immediately commissioned the group to create a full-length show.

Their first piece was termed as “Tubes”, the piece took off after Vladimir convinced the New York Times theater critic Stephen Holden to review it.

The success of the group brought the show to Off-Broadway. In 1991, they performed at the Astor Place Theatre in NYC.

In their early history, the cast would speak and sign autographs with the audiences after the show.

However, it was decided that the members must stay in their character at all times, after shows, they would not speak to their audience and the only autograph would be a smeared mark of blue paint.

At that time, Blue Man Group was a growing success in terms of popularity and performances. In fact, the show performed at Lincoln Center’s summer Serious Fun Festival and achieved one Obie and Lucille Lortel Award.

Blue Man Group Events Near You 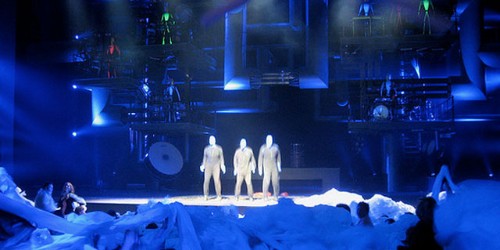