Carrot Top’s real name is Scott Thompson (born on February 25, 1965), he is an American actor, stand-up comedian, producer, director, singer and writer. Top is best known by his comedy, self-depreciating humor and his bright red hair. Carrot Top was awarded as the Entertainer and Comedian of the year in 1993, he was also recognized as the funniest male stand-up comedian in the year 1994. He had his first stand-up comedy sequence during his freshman year at Florida Atlantic. Before and after he finished college, Top worked on numerous comedy jobs while honing his talent as a stand-up comedian...

Tickets for Carrot Top are on sale now!

Seeing Carrot Top as a distinct comedian is just a clear evidence of how hilarious and funny he really is. The moment he arrives on stage, no audience could really tell what kind of unusual contraption or anything that appears to be completely crazy he’s going to pull out next. He has the kind of droll and witty existence that always gives delight to his audiences. He has been entertaining people worldwide from his several shows in Las Vegas and other countries, including his consecutive appearances on televisions. It seems that Top was born to make people extremely happy and crazy.

Most of his larks and jokes are just mere extensions of his naturally funny, lighthearted and comic personality. Although few of his jokes are mostly taken out from his prop trunks, many people depend on his talent as a stand-up comedian and being too comic spoken about everything he sees or wants to make fun of, which always appears to be really funny and jaw-breaking.

Carrot Top’s success in his career being a stand-up comedian and a total entertainer at a time has evolved to a more improved set up with music, stage effects and machines. His shows are just as crazy and exciting like his big and bright red hair. The laughter he draws in the thousands of faces only proves that he is more than just that.

Carrot Top Events Near You 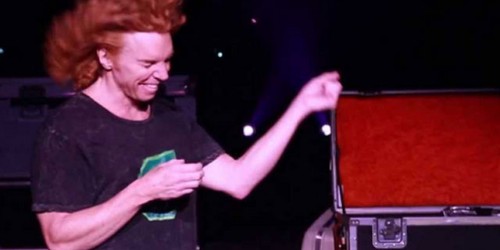