Currently, the Oregon Symphony is under the lead of music director Carlos Kalmar, associate conductor Norman Huynh, and principal pops conductor Jeff Tyzik. Kalmar has been directing for 16 concert seasons; from the start, he has been adored by critics. In 2011, Kalmar opened with the Oregon Symphony in Carnegie Hall, a performance that received rave reviews and accolades that season. Alex Ross of the New Yorker described the debut performance as “the highlight of the festival and one of the most gripping events of the current season.” Tyzik’s influence is likewise impressive. Having worked with over fifty orchestras around the world, his compositions and arrangements across genres are stunning. Huynh’s career has taken a slightly different route, focusing on the craft of conducting and organizing community orchestras. Under the leadership of these astounding artists, the Oregon Symphony is flourishing.

Like all symphonies, the Oregon Symphony is supported by strings, woodwinds, brass and percussion instrumentalists. Over 75 musicians are employed to bring the compositions to life. For folks in Portland, Oregon, there are a variety of community programs and events available through the orchestra, including concerts for kids, symphony storytimes, kinderkonzerts, young people’s concerts, and more. More information on family events and resources can be found on their website.

In addition to live concerts both at home and across the world, the Oregon Symphony is known for knock-out recordings, including Gospel Christmas (2018), Aspects of America (2018), Haydn Symphonies (2017), Spirit of the American Range (2015), This England (2012), Music for a Time of War (2011), Tragic Lovers (2008), Walton (2005), and Sibelius (2004). Although listening to exceptional music on-the-go is a convenience, it does not top a live performance. If any of the Oregon Symphony’s in-person offerings appeal to you, explore ticket information today.

Oregon Symphony Events Near You 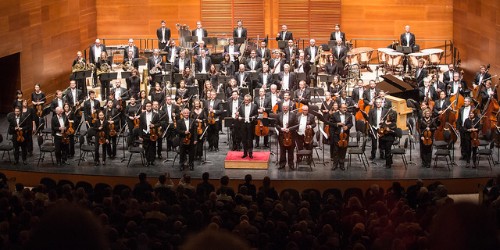