WWE SmackDown—also known as SmackDown Live and SmackDown—is a televised professional wrestling program that promotes sports entertainment. With over a thousand episodes in the program’s archives, it is a longtime success in WWE’s show list. Fan have the opportunity to watch these two-hour events live on television, at their own convenience on television, or live in person...

Since its premier in 1999, this series has flourished. Though created and directed by WWE owner Vince McMahon with Kevin Dunn and Paul Levesque, a number of writers have contributed to the writing of the show, which focuses on live entertainment. These writers include Brian James, Ryan Ward, Stephanie McMahon, Paul Heyman, Dusty Rhodes, Bruce Prichard, Michael Hayes, Christopher DeJoseph, Alex Greenfield, Jenifer Bloodsworth, Steve Oppenheim, and Dan Madigan. More so than the writers, presenters and commentators Tom Phillips, Corey Graves, and Byron Saxton are associated with the program. With a focus on live entertainment, a number of networks have featured SmackDown Live, such as The CW, USA Network, Sling TV, MyNetworkTV, UPN, Syfy, theScore Inc., and—of course—WWE Network itself.

Besides for network breadth and writer quality, SmackDown Live has advantages over much of the wrestling programming available today, even within the WWE franchises. One obvious appeal is that the stories are bulkier—the feuds are less predictable, and the rivalries are layered. In addition, the production value is impressive for live action sports TV. There are multiple camera views, and the mic work is performative. The two-hour timeslot keeps things condensed enough to avoid filler, but long enough to pack in the drama. All things considered, the best episodes of SmackDown Live come across like pay-per-view events. Although some fans are disappointed that few big-name wrestlers take to the ring in this event, the variety of newer faces lends itself to the theatrics of the event—new characters, new roles, new plots, new possibilities.

Although the WWE has been expanding its cable and online viewership options in new, cutting-edge ways, there is nothing quite like seeing an event in person. Upcoming events take place in Oregon, Texas, New Hampshire, Florida, and even abroad in Great Britain. If you are interested in seeing the SmackDown Live stories unfold close to the action, book your tickets today. If you are lucky enough to have an event hosted close to your home, enjoy the day out on the town. Better yet, book tickets at a distant venue and make a trip around the awesome event.

WWE Smackdown Events Near You 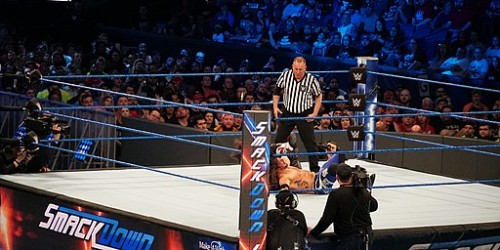