Nashville is known for its role in music tourism. With iconic venues such as the Grand Ole Opry House (Opry schedule), The Country Music Hall of Fame and Museum, the Johnny Cash Museum, the Ryman Auditorium (Ryman schedule), and the Bridgestone Arena (Bridgestone Arena schedule), it is no wonder why Nashville claims to be Music City. When visiting these noteworthy establishments in Nashville, be sure to appreciate the vast number of concerts occurring around the clock to get a good sense of what makes the music of this southern city special...

Event Tickets for Nashville Concerts are on sale now!

With over 180 live music venues, Nashville has a huge number of performances every single day. Some cities only come alive on weekends, but that is not the case in Nashville. Listeners should check out organizations such as Now Playing Nashville, which gather concert info, such as artists, show name, date, location, and time, so that those who are intrigued by concerts can have their pick of the crop. Never a boring city, there are many Things to in Nashville.

Over 200 concerts will occur each night of the weekend, and that does not include underground performances filling up garages, basements, back rooms, and back yards. Some of the performers include the following artists: Jon Batiste, Cody Johnson, Sure Sure & Wilderado, Lane 8, Josh Groban, Michael Martin Murphey, Gary Mule Deer, Gallant with Jamila Woods, Mikaela Davis, Chris Robinson Brotherhood, Herrick, Ciara Rae, Buffalo Wabs and The Price Hill Hustle, Kylie Frey Round, Sammy Arriaga, Abbey Cone, Jaden Michaels, Lori Beth, and many, many more.

For Concerts in Nashville (Tennessee), please see our event listing calendar of Concert tour dates below!

Nashville’s conventional artists include the following familiar faces: Tim McGraw, Faith Hill, Keith Urban, Alan Jackson, Martina McBride, Amy Grant, Vince Gill, Lady Antebellum, Kings of Leon, and Kesha. Signed to dominant labels in the city, these artists and their contemporaries draw much of the attention in Nashville’s venues. Musicians with similar sounds and aspirations compete for spots in the lineups at the elite venues in town.

However, against this synonymous music culture, new waves of indie musicians are collaborating and creating, and audiences are responding to the noise they are making. They challenge the notion that labels gatekeep the sounds of Nashville, by advertising singles on the radio and filling venues with recording studio sweethearts. As independent music has grown in an internet age, indie, DIY, and other sub-scenes in music are strengthening their voices. Artists such as Olivia Scibelli of Idle Bloom believe that there is a budding anti-establishment mentality in Nashville, which is conducive to these often-overlooked aspects of the city’s music community.

Venues such as DRKMTTR—a barber shop house party downtown—is one of these spaces. Ran by volunteers, its crowd is refreshingly anarchic. Punk rock, Americana, indie, pop, and other scenes are swelling in DIY spaces, countering the country sounds that put Nashville on the map. In addition, with the success of rock band Kings of Leon native to Nashville, rock transplants such as Jack White and the Black Keys have made their ways to Nashville, giving greater credibility to the unorthodox sounds its artists make. For listeners who love country and for listeners who like something beyond the dominant country sound, Nashville has concerts worth seeking.

How Do I Find Upcoming Nashville, Tennessee Concert Events Near Me?

See below for a list of Concerts scheduled in Nashville TN. 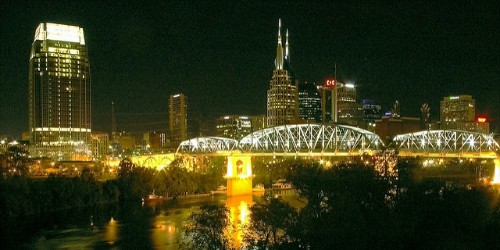