Jabbawockeez Tickets On Sale at CheapoTicketing


Jabbawockeez is a group of dancers comprising eight male members.The hip-hop dance crew came in to popularity after winning the America’s Best Dance Crew First Season. They are best known by their unique trademark being ‘faceless’, the group usually performs on stage with their faces covered with white masks...


Through years of providing joy and inspiration inside and outside the dance floor, Jabbawockeez has always been looked up by almost all of the existing dance groups in the dance industry. They toured Australia in August 2009 and tickets for Jabbawockeez were mostly sold out.

Adding to the big success of their career, the Jabbawockeez achieved several awards, including the 2008 AXA (Asian Excellence Awards), the ‘Living Legend of Hip Hop’ award from the Hip Hop International in 2012 and being awarded as the recipients of the ‘Lifetime Achievement Award’ from the Set It Off Competition in 2013.


The Jabbawockeez was the first dance crew to perform on the Las Vegas Strip being the headliners. In 2010, Jabbawockeez has performed a show named ‘M.U.S.I.C’ at the MGM Grand and it was later transferred to the Monte Carlo. Jabbawockeez tickets for their Las Vegas show are listed below.

The Jabbawockeez’ new show will be at Luxor, Las Vegas featuring a new set up of music, costumes, sets and special effects. The dance crew performs at the amphitheater-style venue that carries a maximum of 830-seats and was creatively designed just for the show.

Unlike most dance groups, the crew creates and formulates their own dance steps without a group leader or dance instructor, all of their creative dance steps are made as a collective unit.

Jabbawockeez Events Near You 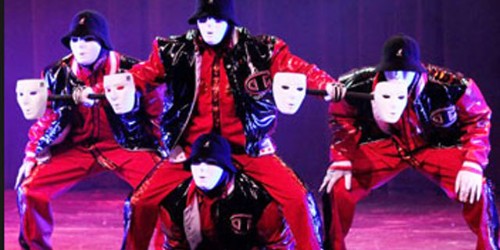