The Ryman Auditorium in downtown Nashville, Tennessee (home to world-famous Nashville concerts), has gone by a number of names – Union Gospel Tabernacle, Grand Ole Opry House, The Ryman, The Carnegie Hall of the South, and The Mother Church of Country Music. Regardless of what it is called, folks agree that it has helped popularize country music. For more information about Ryman Auditorium and why you should visit, keep reading...

Being on the National Register of History Places and a National Historic Landmark of the United States, this venue’s history goes way back. Its story started in 1885, when the riverboat captain Thomas Ryman heard a religious evangelist Sam Jones speak at a tent revival. Inspired and converted with a newfound religious spirit, Ryman dreamed of building a religious gathering place. Just three blocks away from Ryman’s religious transformation, the venue was built. Construction took seven years. Have questions about Ryman Auditorium? Explore our comphrehensive Ryman FAQ!

Although Ryman intended for the venue to be more about religion than anything else, the venue ended up hosting many other types of events to offset the cost of construction and maintenance, and it also took on a role as a community post. Before the 1900s were underway, it held performances from John Phillip Sousa’s Peerless Band, mass meetings of the “Law and Order League” to combat saloon power and Sunday gambling, and speeches from Susan B. Anthony on its stage. Celebrated African-American educator Booker T. Washington, presidential debates, and various opera stars stood ground at Ryman Theater, too. Even in more modern times, the venue is an important part of American culture, where Dolly Parton and Porter Wagner were recorded reuniting, where tributes and memorial services for some of country’s finest are held from Johnny Cash to Waylon Jennings, where modern fans go to see a piece of culture and history.

Situated at 116 Fifth Avenue in Nashville, Tennessee 37219, audiences of around 2,000 (View Ryman Auditorium Seating Chart) can still experience Ryman Auditorium. Several major renovations and expansions have happened since opening in the late-1800s, but plenty of charm still sticks out at the venue, from the old church pews to the stained-glass windows. While in town, you can also take a look at the Bridgestone Arena schedule for additional shows at this nearby arena in Nashville. Besides these music venues, there are many things to do in Nashville. 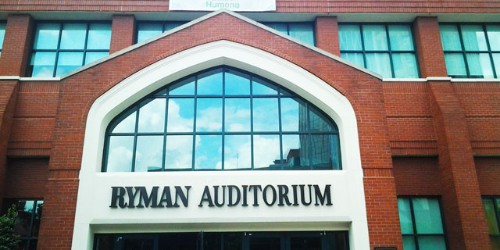