Puerto Rican rapper, singer, and producer Bad Bunny—also known as Benito Antonio Martinez—has procured a massive audience since entering the international music sphere in 2016. Playing up Latin American genres such as musica urbana, Latin pop, and reggaeton, he is bringing Latin American culture to the world. With a slew of wildly popular hit songs and head-turning style choices from manicures to plastic suits, he is hard to forget. To learn more about his music, keep on reading...

Bad Bunny has set himself apart from many popular artists for his unusual path to success. In the past, many musicians had to put out their own albums before listeners took notice of them. However, as social media and internet sharing becomes more and more popular, the path to success in the music industry has new, unconventional routes to follow to the top. Bad Bunny is one of these unconventional artists. He first started sharing his music on SoundCloud when he was attending school for audiovisual communication at University of Puerto Rico. Then, before releasing an album or EP, he helped created multiple Top 100 singles. For example, in 2018, his rapping and singing made its way onto “I Like It” with Cardi B and “Mia” with Drake.

Just as Latin America is an incredibly diverse place, so is Bad Bunny’s music. He is sometimes described as a chameleon when creating music, especially in his role as a producer. His style influences include Latin soul, rhythm and blues, trap beats, reggaeton, pop, rap, and more. His artist influences include the music of Hector Lavoe, Marc Antony, Daddy Yankee, and DJ Luian. Because of all of these unique perspectives melding together, Bad Bunny can pick and choose which style to embrace to make a track stand out, giving each song a special something that sets it apart from other songs. Apparently, Bad Bunny has struck a fantastic balance, a signature style that has led him and his collaborators to commercial success.

If you are intrigued by Bad Bunny’s unique cultural perspective or looking to dance to his latest pop-meets-Latinx collaborations, think about hearing Bad Bunny on tour. Billboard declared his debut album—X100PRE—the “highest ranking debut” on the Latin Albums chart, so you know his music, whether solo or collaborative, has to be good. If you cannot make it out to Puerto Rico, fear not: Bad Bunny goes on tour, revving up crowds in Florida, Texas, California, and beyond. Buy your tickets today.

Bad Bunny Events Near You 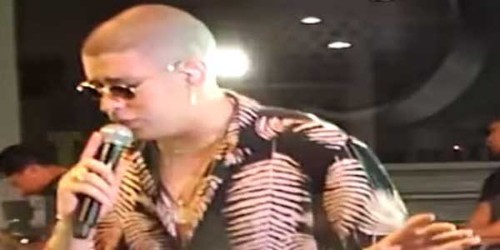